Who would have thought disinformation could turn a society upside down? 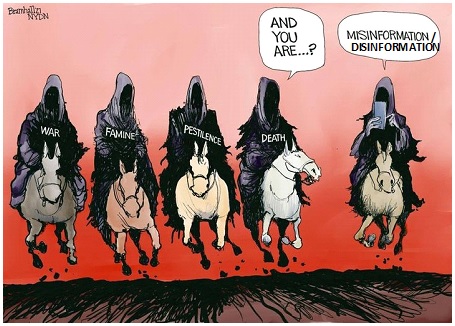 Mark Twain once said “a lie will fly around the whole world while the truth is getting its boots on”. He said that in the era of newspapers, books, and the telegraph. In those days, not everyone could publish a newspaper, write a book or even send a telegram. But today with the Internet, anyone who has a computer can post or pass on lies on sites like Facebook, Twitter, Instagram, and YouTube. These are some of the sites used to spread misinformation/disinformation now, and they make it easy for bad actors, even foreign governments, to intervene in our political system. There are even bots (robots) that can spread false information faster than a human can. And there are the dozens of right-wing talk shows a la Rush Limbaugh and TV channels like FOX, OAN and Newsmax that have been guilty of passing on falsehoods.

We can start with definitions. Misinformation is just a falsehood caused by a mistake. It is an error. However, if someone has not done enough critical thinking and due diligence in their research, they can be an accomplice in passing on misinformation. But disinformation is intentionally created for a political reason. The CIA used disinformation to overthrow many governments which did not side with the U.S. and international corporations during the Cold War.

Trump’s lie that the 2020 election was stolen is an example of disinformation. The former President wants to be installed again in the White House as a permanent President. This lie was spread by the social media sites like Parler, which many people have never even heard of.

The Jan 6, 2020  attack on Congress was the result of Trump’s disinformation. We now know there was a plan directed from the White House to create fake slates of Electoral College electors from seven states so the election would be thrown into the House of Representatives where each state would have one vote. This was one of many schemes hatched to allow Trump to steal the election, which is what he is accusing Biden of doing.  I never thought I would see Mike Pence as a hero, but he is a Hoosier and so was I as a kid.

A high percentage of ordinary Republican voters now believe Trump’s lie (in February 2022). This lie undermines faith in elections and is dangerous in a society that aspires to be a democracy. Posted on the website ”Political Violence at a Glance”, Barbara F. Walter, has told us that 2006 was the year democratization peaked around the world and the decline after that, led by the United States, that was the result of misinformation and disinformation spread by social media.

Is the Justice Department investigating the people, organizations, and money that organized the January 6, 2020 attempt to overthrow the government? As an organizer, I know how much work it takes to get thousands of people to show up at a particular place and time for a political event. We know the committee in Congress is investigating this, but they have no power to prosecute. There needs to be accountability to move on and strengthen democracy.

The University of Washington Center for an Informed Public is a 2 year old project which is working on the problem of how to deal with disinformation. They offer a short course  “Calling Bullshit”. Pacific Call will work to tell the truth. Surely there is more we can do! Can we craft a new communications bill, that will limit the non-local and concentrated ownership of newspapers, and restore the concept of fair and balanced to the law, instead of allowing Fox use it as a slogan? Can we make critical thinking and internet savvy a course requirement in our public high schools?